Pöide hill-fort was one of the biggest prehistoric and medieval fortifications in Saaremaa. The present height of the walls is 5-6 m from the courtyard, and 10-11 m from the outside. Holes on the top of the hill-fort’s rampart date to the World War I, and had a military purpose. The hill-fort courtyard is 85 m long and 55 m broad, and in the middle of it is a hollow, one-time well. Next to the hollow is an elevation of big boulders, probably the remains of a building. The thickness of the cultural layer is 0.2-0.3 m in the middle of the courtyard.

Archaeological excavations were carried out here from 1990-to 93 under the supervision of Vello Lõugas. The excavation area (160 m2) aside from the NE entrance of the hill-fort mainly embraced the courtyard aside from the wall but also cut the wall with one corner. Two building layers of houses with stoves were uncovered, built directly on top of each other.

The first hill-fort was built approximately in the 7th-8th century, before the Viking Age. It was surrounded by walls built of stones and sand. On top of the walls was probably a wooden palisade, and lining the inside of the wall towards the courtyard stood log houses. The Pöide hill-fort presumably functioned as a political center of the surrounding district, where local chieftain or chieftains together with their families and retainers resided at least part of the year. A garrison, guarding the hill-fort, may have permanently stayed in the fortification. Viking Age finds have also been found in the midst of the present Iruste village – perhaps once the site of a manor belonging to the same chief as the hill-fort did. Ceramics similar to the ones at Pöide hill-fort have also been uncovered at Tornimäe – an early and middle Viking Age harbour site 7 km away from the stronghold.

The pre-Viking and Viking Age hill-fort burned down around 1000 AD. In the 12th century at the latest, a bigger and stronger fortified hill-fort was erected right on top of the remains of the old one. Its ramparts and gates with additional fortifications are those seen today. This time the wall consisted of sandy soil with major log-built caissons at its core. When the latter decayed, the sand spread around. Back in the Middle Ages, the wall must thus have been several meters higher than nowadays, and furthermore, an additional wooden fortification covered the surface of the wall.

As is indicated by the intensive culture layer, numerous finds, and 14C analyses, the late hill-fort lasted until the 14th century, and was, accordingly, contemporary with the fortified tower aside from the Pöide church at the distance of 2 km. However, the big Pöide hillfort has never been mentioned in any written sources, despite its size and strong fortifications. 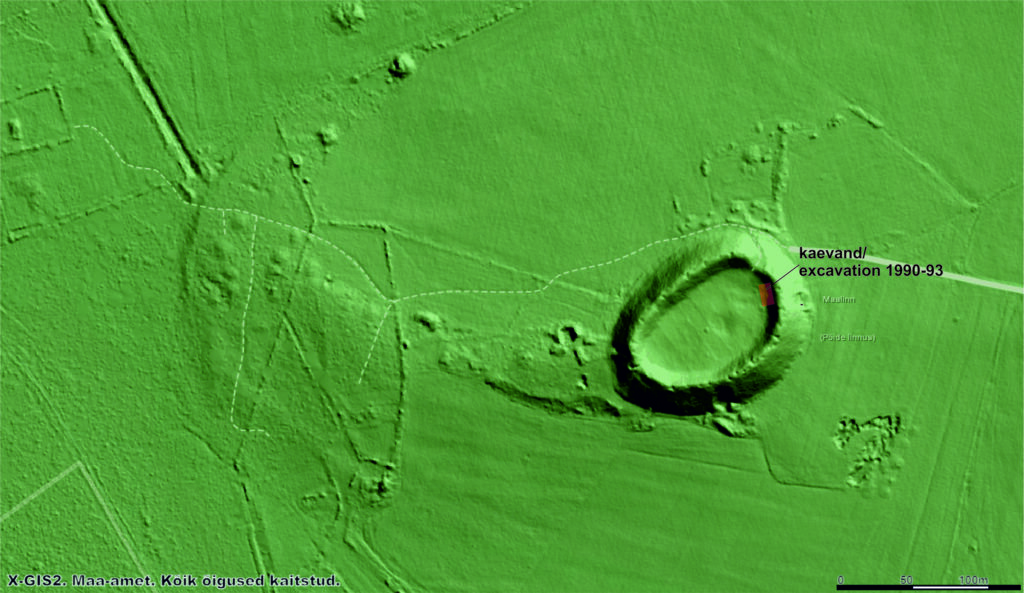