On the map from 1650, the river of Salme was depicted as a strait between the islands of Kuressaar and Sõrve. ‘Salm’ in Estonian means small strait, especially between two islands. In the early 2000s, during a research project focused on prehistoric harbours, the area around the Salme school was identified as a possible site for a prehistoric harbour. Unfortunately, the archaeological research was complicated due to this area being affected by the battles of the Second World War, as well as by terrain levelling works from the later decades. Therefore, the archaeologists were not able to locate the presumed harbour site.

At the end of the 2000s, two boat burial graves were discovered during roadworks and were thereafter excavated by Marge Konsa and Jüri Peets in 2008-2012. The graves were characterized by both local and foreign features, and most of the warriors buried there were of Scandinavian origin. However, some of them may have been locals as well, as indicated by strontium analyses. It is commonplace to find graves near prehistoric harbour sites of Saaremaa, frequently with burials otherwise uncommon in Saaremaa.

The first boat of Salme was discovered during roadworks when human bones with single artifacts from the 7th-8th century came to light. Six lines of boat rivets were recorded as well. The dead had been buried in a clinker-built boat, which wooden parts were almost totally decayed. The stern was ruined by the construction works. The boat had been 11.5 m long and 2 m wide, with about 40 cm draught. According to 14C analyses, the vessel had been built in the first half of the 7th century and used for burial at the end of the 7th century or in the first half of the 8th century. One of the analyses taken from an animal bone was also dated to the period from the 8th century up to the end of the 10th century (Konsa et al 2009, Peets et al 2011).

Some building details, e. g. boat rivets indicate boat building tradition that was widespread in the east coast region of the Baltic Sea (Mäss 2009). A small rowing boat like the one from Salme I was indeed better suited for sailing in Väinameri (the sea around Estonian islands) than in the open sea.

Remains of seven different individuals were found from the first boat of Salme. The bones were completely intermingled and represented only fragments of skeletons. Several researchers have explained the fragmentation of bones with later construction works at the site, or even by the possible sitting position of the deceased (Allmäe et al 2011). It should be taken into account, though, that fragmented and intermingled bones characterized most inhumation burials of Saaremaa up to the Middle Ages.

The second ship of Salme was found in course of the same roadworks in 2010 when other artifacts were unearthed. Its length was 17-17.5 m and it was 3 m wide. Compared with similar, but better-preserved boats from e. g. Kvalsund, Ladby, or Frombork, one can conclude that the draught of the second vessel of Salme may have been 0.5-0.9 m and the height of the broadside from the bottom of the boat 0.8-1 m. The contour of a dark layer of humus, which was preserved under the boat, indicated a vertical keel. Accordingly, the ship must have had a sail. The second vessel of Salme is the oldest archaeologically excavated sailing ship in the Baltic Sea region.

About a century ago, there may have been a hollow in the ground upon the burials in the one-time boat, which was filled up with soil, pebbles, and waste in the 20th century. It seems likely that the hollow indicated a burial chamber that had collapsed when the wood decayed. The position of burials, as well as colour differences in soil, seem to point to the one-time time existence of the burial chamber, too. The custom of bringing the dead to a burial house, where they were deposited close to each other, and where the remains of the skeletons intermingled in course of time is characteristic of prehistoric Saaremaa. Collective burials were rare in Iron Age Scandinavia, even though ship burial as such can be considered Scandinavian.

The ship burial II of Salme included the remains of 34 different persons. They had been buried in three, partly in four layers, which were sometimes separated from each other by a several-dozen-centimeters thick layer of sand. The whole burial area (or the burials inside the chamber) was covered with a layer of stones similar to other stone graves and burial houses of Saaremaa (Mägi 2021). 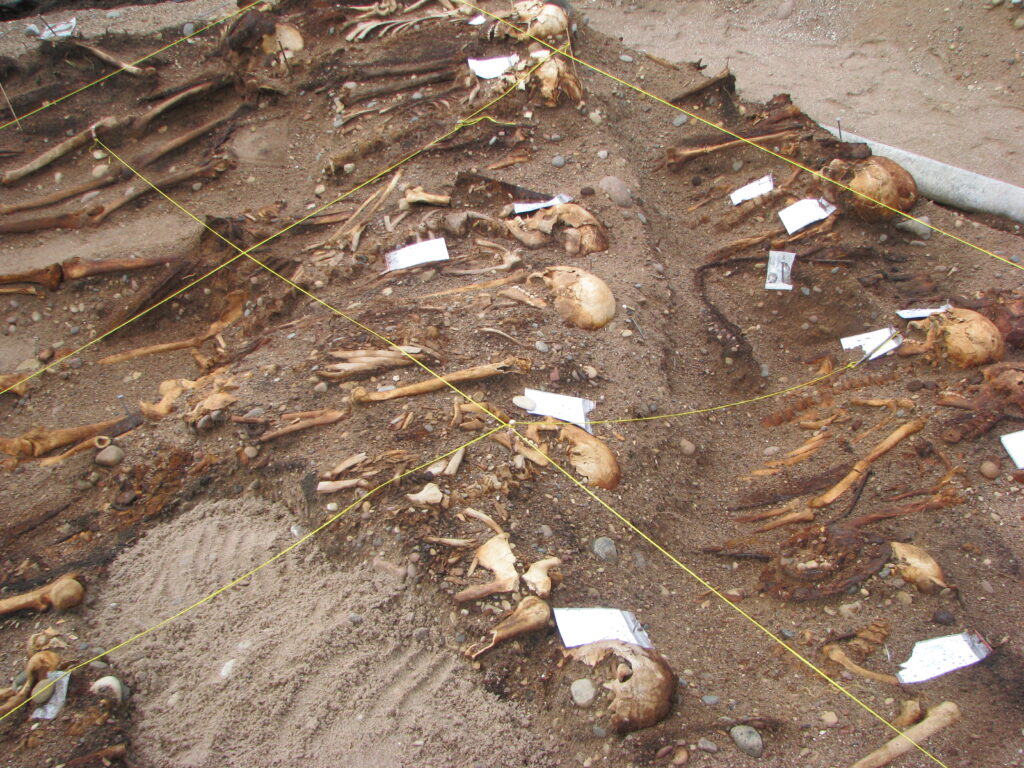 All 41 of the dead buried in the Salme vessels were male and warriors, as is evident from their belongings and wounds found in their skeletons. They were in their prime years, strong and tall. Better offerings and belongings were found from the second ship, which was also preserved better. From there, 40 swords or fragments of swords were found, including 10 completely preserved one-edged blade swords. Several pieces of armoury were decorated with elaborated Nordic animal-style ornaments. Some of the ornamented details were similar to the ones found from the contemporary Valsgärde grave in Mid- Sweden, others to the findings from Southwest Finland.

There were no big flat crossbow brooches or dress pins that were characteristic for warriors in Estonian and Finnish coastal areas, but some simple fibulas made of iron were recorded. Such simple iron fibulas were common in Finland, but also quite widespread in Middle Sweden.

Other noteworthy finds were 91 arrowheads and 251 gaming pieces made of whale- and walrus bone. There were also remains of at least six dogs, falcons, as well as of some other animals and birds.

Most of the skeletons were in their place as a whole, but some of the dead were represented only by e. g. sculls or shinbones. Allegedly there were also other different individual pieces of human bones found in several other places near the articulated skeletons (Peets et al 2011, 2013). aDNA analysis of the Salme individuals indicated the kinship of the several men buried there (Margaryan et al 2020). For example, four skeletons laid down beside each other belonged to four brothers. However, the 14C analyses of the bones pointed to slightly different periods, varying from 650 to 940 AD. What makes it more complicated is, that the 14C dates did not entirely correlate with the stratigraphy of the burials, meaning that the ones dated to be from earlier weren’t necessarily buried at the lower layers and vice versa. Even more so, the finds could be dated to be from the long era from the 6th up to the 9th century as well.

During the Viking Age, the boat and ship of Salme were located on the beach. According to different opinions, the burials were deposited there either all at once or during a somewhat longer period, for example during several decades. The vessels were probably halfway dug into the ground, but not covered with soil. Despite that, the burials were never looted. Considering the weather of Saaremaa, a wooden ship can hold together for 50-70 years. The ships of Salme must have been covered with sea sediments ushed to the coast during some intense storm. By then, the wood was probably already decaying, but the burial chamber was still standing. The storm pushed it to the ground and, when collapsing, it ruined the ship planks on the side of it. By the end, the vessels with human remains inside were hidden under the sea sediments.